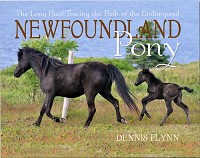 In The Long Haul, photographer and writer Dennis Flynn traces the path of the endangered Newfoundland Pony in a photo essay profiling the past and present uses of this remarkable designated heritage animal. From an estimated population of more than 12,000 animals in the 1970s, the number of ponies plummeted to less than 100 worldwide in the 1980s. Today, through the efforts of dedicated individuals and organizations around the province, across Canada and beyond, the number of ponies has gradually rebounded to around 350 known animals. The Long Haul aims to capture images and impressions of the fabled Newfoundland ponies and raise awareness of these remarkable animals as they struggle back from the edge of extinction in search of new relevance in a modern world.

On October 7th, 1612, John Guy, founder of the English colony at Cupids, Newfoundland, set sail on board the 12-ton barque Indeavour. Along with a smaller shallop and crew, the two vessels set a course for Trinity Bay, Newfoundland in an attempt to establish friendly relations with the native Beothuk Indians. Along the way, each crew met and overcame their own challenges, including the men of the shallop losing their craft and having to return to Cupids on foot.

In Voyage, photographer and writer Dennis Flynn retraces the journey of guy and his crews in a photo essay profiling the modern-day communities along the routes, with special attention paid to John Guy’s legacy, the town of Cupids, the birthplace of English Canada.

Prints found in the gallery section of the website are available for purchase through Paypal. If you would rather another method of payment, or have any questions, contact me through the contact form.